Buffalo Scholastic Rowing Association is 501(c) 3, membership-based, community  educational and recreational facility located along the Buffalo River. Buffalo Scholastic Rowing  Association promotes teamwork and leadership among other lifelong skills centered around the art of rowing.  Access to the waterfront provides service learning opportunities to the public. Support from donations, grants,  and fund raising provide additional revenue to sustain the Association.

Through the sport of rowing, the Buffalo Scholastic Rowing Association enriches the Western New York and Old First Ward communities. We provide access to safe, fun and affordable recreation educational opportunities on the Buffalo River.  Preparing young men and women for rowing and life one stroke at a time. 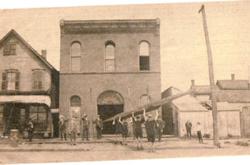 The sport of rowing in Western New York

The sport of rowing is one of the oldest competitive team sports in history. Rowing has a long history in Europe and North America dating back to the mid 1800s. From the 1860's to 1920 Buffalo boasted 14 rowing clubs with over 2000 members. As one of the few rowing centers in the United States, it drew from the working class Irish, German, Polish and Italian living near the water.

The most famous of those early rowing clubs, the Buffalo Mutuals was housed in a brick building about 400 meters from the current location of the Buffalo Scholastic Rowing Association. A replica of that historic building has been recently constructed at the foot of Hamburg Street to acknowledge the Mutuals and their rich history in the Old First Ward.

After 1920, scholastic (school based) programs replaced club rowing, and was dominated by Buffalo public schools such as Lafayette High School and Hutchinson Technical High School. Following a disastrous boathouse fire in 1975 that almost destroyed these programs, private and parochial schools located in the City of Buffalo emerged to strengthen scholastic rowing.

In 2010 lifelong rowers and rowing coaches from the WNY community formed the BSRA to provide increased resources and greater access to the sport of rowing for the communities of Western New York. The BSRA represents the first new rowing organization and facility in Buffalo in over 100 years. Located on the Buffalo River, the BSRA facility has breathed life into the Buffalo River renaissance and excited the Old First Ward community by offering rowing programs right in the neighborhood. The BSRA is a lynchpin in the effort to increase recreational use of the Buffalo River and strengthen efforts to rebuild the community.

BSRA is an association of high school rowing teams and community based rowing clubs with and expressed purpose to facilitate safe and equitable access to the Buffalo River for new and emerging rowing programs. The organization is a rowing cooperative requiring each member group to assume responsibility for its programs to the extent financially possible. Where there are shortfalls in assets the BSRA is positioned to maintain programs while helping to develop their organizational stability.

The BSRA has two primary goals: 1) to build strong and successful scholastic rowing teams; and 2) to expand community access to the sport of rowing. Perhaps the most innovative aspect of BSRA is the commitment to facilitating autonomous programs: each school owns their own equipment and can tailor their practice and race schedule to accommodate their individual schools' competitive goals and programmatic needs. Through this policy approach, BSRA has successfully expanded the footprint of rowing in Western New York through revitalizing scholastic programs in the Buffalo Public Schools, supporting the continuing improvement of existing programs and fostering new programs.

The primary barrier to more rowing programs is cost and program infrastructure sufficient to support the complexity and expenses related to rowing. BSRA is dedicated to maintaining a fee structure that provides rowing access to school based teams at the lowest market cost.

Because Buffalo Scholastic Rowing Association acts as a facilitating organization, all member groups have a strong decision making role within BSRA. Each member organization has a seat on the BSRA Board of Directors. This guarantees a direct role in day-today rowing operations as well as charting the future for the organization.